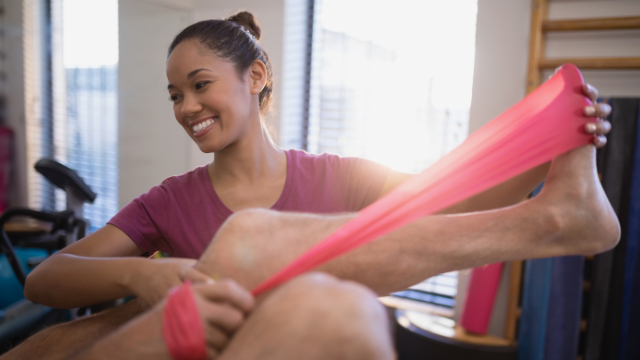 The meniscus is a wedge-shaped piece of cartilage between the thighbone and the shinbone. There are two menisci (plural of meniscus) in each of your knees, and the job of each of these structures is to stabilize the knee joint and absorb shock. Tears of the meniscus are very common, and many of these injuries are treated with a surgical procedure called arthroscopic partial meniscectomy (APM). This procedure involves a surgeon using small incisions to guide a camera and surgical instruments to remove part of the meniscus, and itâs currently one of the most commonly performed surgeries in the world. Millions of arthroscopic knee surgeries are performed throughout the world each year, and even though itâs not clear if surgery leads to better outcomes than conservative (non-surgical) treatment, the number of these procedures is decreasing slower than expected. One way to change this trend is by evaluating the costs of surgery compared to conservative treatments like physical therapy to help doctors and patients make better decisions, but no study of this nature has been performed yet. Therefore, a study was conducted that evaluated the costs of physical therapy versus APM for patients with meniscus tears to determine which of the two treatments is more cost-effective for patients.

Data was collected from an ongoing study called a randomized-controlled trial (RCT) on 321 patients with a meniscus tear. These patients were carefully selected based on specific criteria and randomly assigned to undergo either a course of physical therapy or APM. Physical therapy consisted of two 30-minute treatment sessions per week for eight weeks for 16 sessions total. A total of 11 different exercises were performed over the course of treatment, including warm-ups and cool-downs on a stationary bicycle, calf raises, leg presses, lunges, balance exercises on a wobble board, and stair walking, walking, running, and jumping. A home-exercise program consisting primarily of step-down exercises was also to be completed twice a week. APM was typically performed within four weeks after patients were randomized, and patients were instructed to follow the same home-exercise program as the physical therapy group during their recovery. Researchers then collected data on these patients related to the effects and costs of treatment at the start of the study and then again 3, 6, 9, 12, 18, and 24 months later.

After 24 months, patients in both groups experienced improvements in knee function. The differences in these improvements was small enough to deem physical therapy a ânon-inferiorâ treatment compared to APM, which is another way of saying that it was no worse than surgery. The costs associated with treatment were also significantly lower in the physical therapy group compared to the surgery group, which included costs of the intervention and those related to paid help, absenteeism, informal care, and unpaid productivity. Further analyses of these results showed that the probability of physical therapy being more cost-effective than APM was relatively high. Taken together, these findings suggest that physical therapy and APM can lead to similar outcomes for patients with meniscus tears, but those who undergo physical therapy will reach these endpoints at a much lower cost. Furthermore, the researchers concluded based on these findings and other evidence on the topic, APM should not be the first line of treatment for meniscus tears. Patients who are currently dealing with these injuries are therefore encouraged to attempt a course of physical therapy first before considering surgery. Taking this conservative approach will likely lead to improvements in pain and function at a lower cost than a surgical route.